If Our Wines Were Flowers 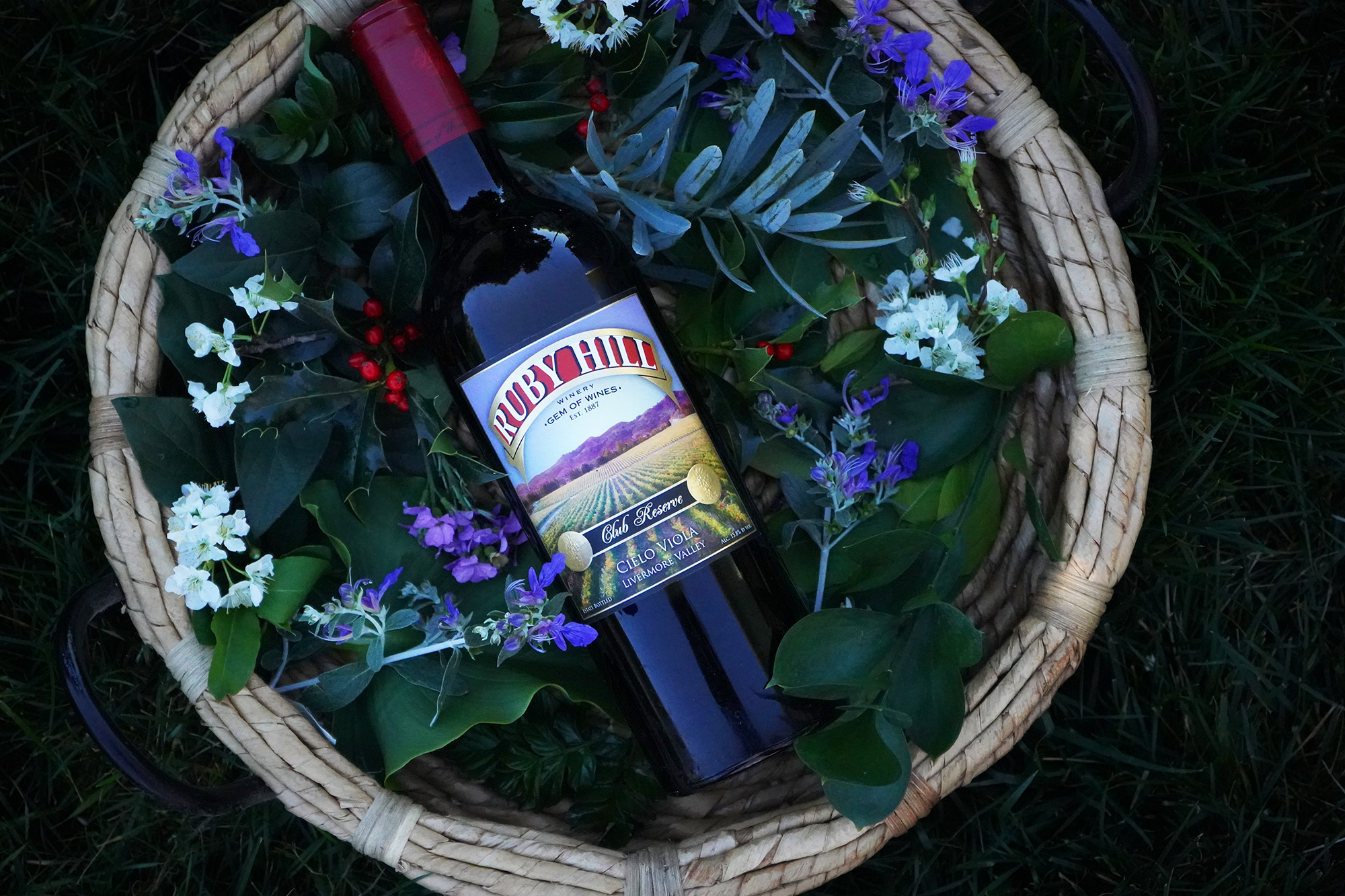 One of our favorite things about spring here on the Estate is watching the flowers bloom and flourish. These colorful ornaments call our attention to the changing seasons and the wonder of nature. This week, we’ve reimagined a dozen of our wines as flowers!

No flower can bring a smile to your face quite as fast as a daffodil. These cheerful beauties remind us of the bright effervescence of our Sparkling Wine!

These yellow beauties have a love for the sun.  Our Sauvignon Blanc fruit is exposed to the sunlight early in the growing process to develop the amazing flavors you know and love.

Elegant and pure, our Jewel Collection Chardonnay proudly unfurls with gorgeous fragrance. Yellow lilies symbolize rejuvenation and joy, just like a sip of golden wine on a sunny day.

Bringing us the most precious tones of pink, both our Grapeful Rose and peony flowers steal the show in every bouquet. Both are delicate, dynamic, and always welcome on our table!

We treasure the virtue found in simplicity. Our Sangiovese is approachable, unpretentious, and still a thing of beauty, making it just like the lovely gerbera daisy.

Our Club Wine Intesa earned its name from a word meaning harmony or agreement. Tulips symbolize deep and unconditional love, which you’ll taste in the intertwined nature of this blend.

The ranunculus flower boasts layer after layer of soft petals, coming together into an integrated whole. The Club-Exclusive Armonia does the same, bringing together multiple vintages of wine into multilayered complexity.

Carnations can represent fascination and distinction, making them the perfect floral counterpart for our Cielo Viola. This wine is an enchanting blend of Zinfandel and Petite Sirah that always has you reaching for another sip.

If wines were turned into flowers, Cabernet Sauvignon would be a breathtaking rose. Whether splashed with color or enrobed in a deep, dark red, these classics capture each other's character.

The inky boldness of Petite Sirah matches the uncommon beauty of the Iris. The dark, bold irises are said to represent valor, wisdom, and royalty, perfect for a Petite Sirah fit for a king.

Lilac flowers bloom for only a short time each year, but their plants are reliably robust, easily living more than a century. Our Jewel Collection Petit Verdot is rich in color, tannin, and body, yet each sip hosts a delicate aroma with features of lilac.

If you were a flower, what kind would you be and why? Join the conversation on our socials @rubyhillwines

If you want to have a "bouquet" of your own, then check out our Case Sales, available for a limited time! 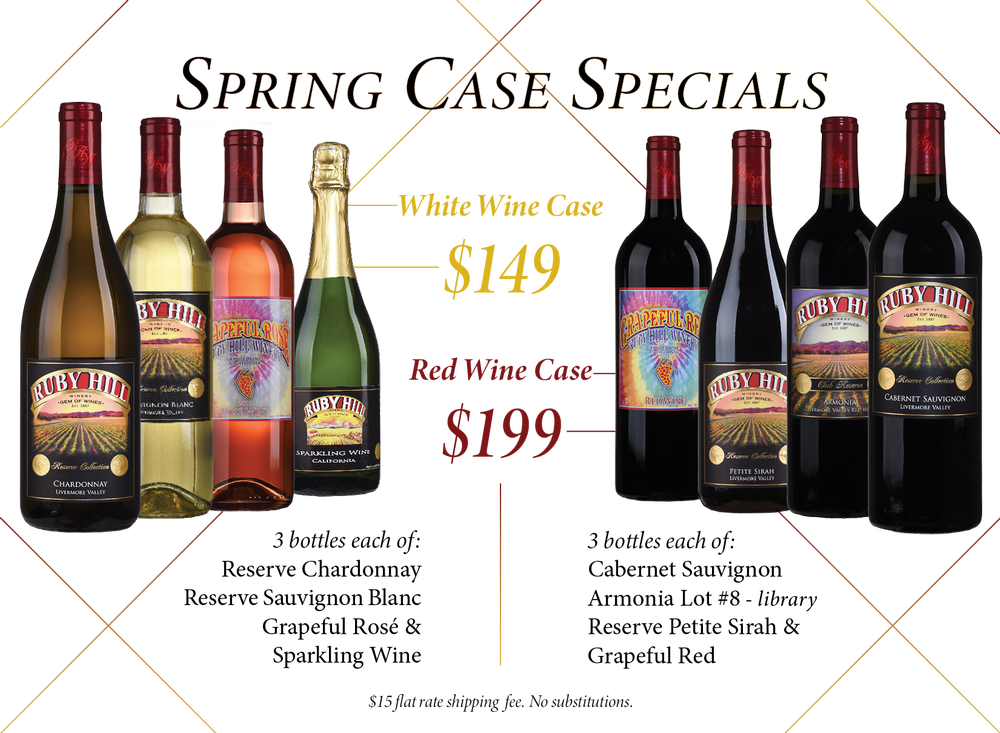 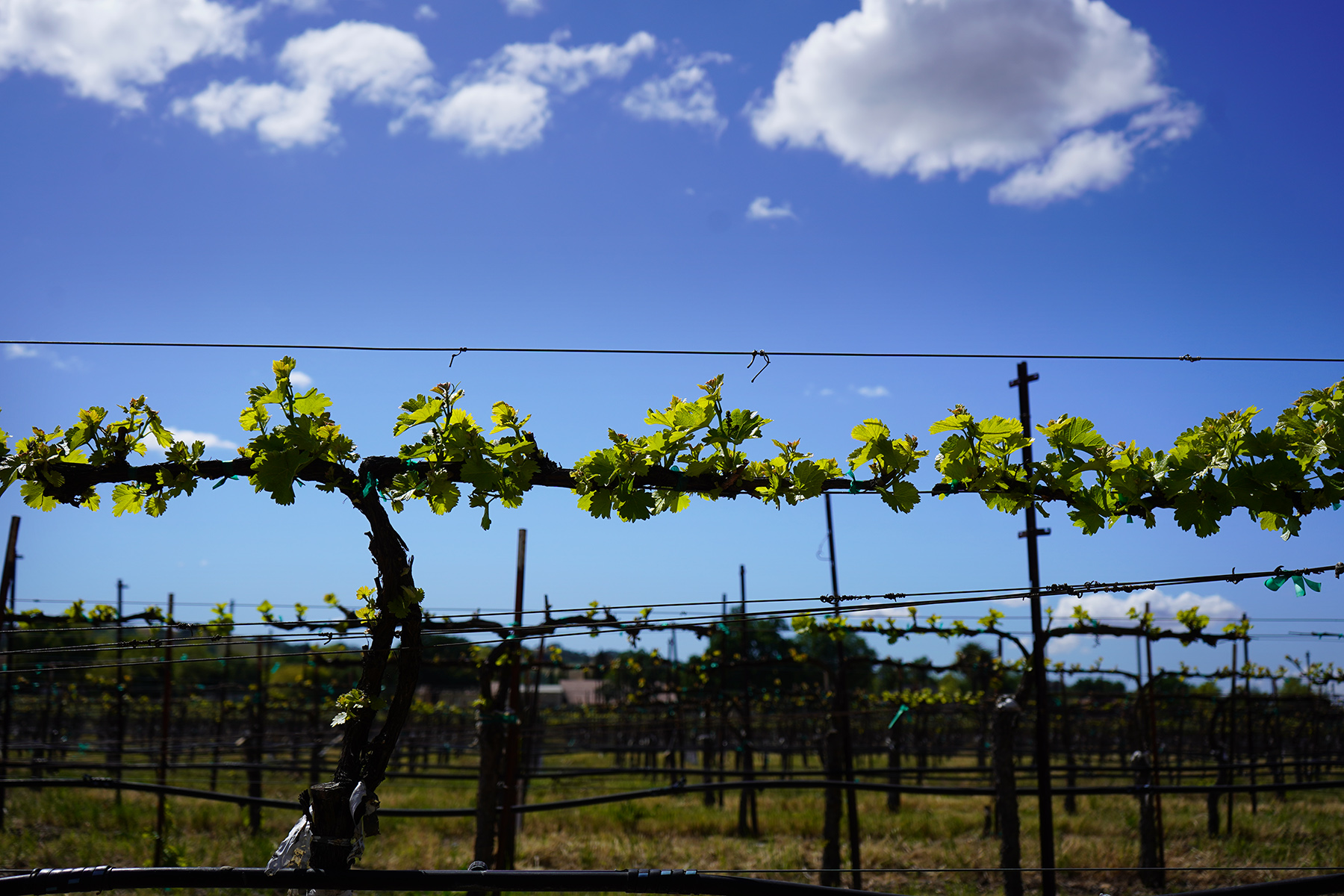 Happy Earth Day, wine lovers! Ruby Hill Winery is proud to grow our grapes in a California Certified Sustainable Vineyard. We take the purity of our fruit and the stewardship of the land seriously and continue to be devoted to careful use of resources. We are committed to adopting all required practices included in the California Code of Sustainable Winegrowing, tracking water use and other performance, continuously improving, and verifying our sustainable status on an annual basis. 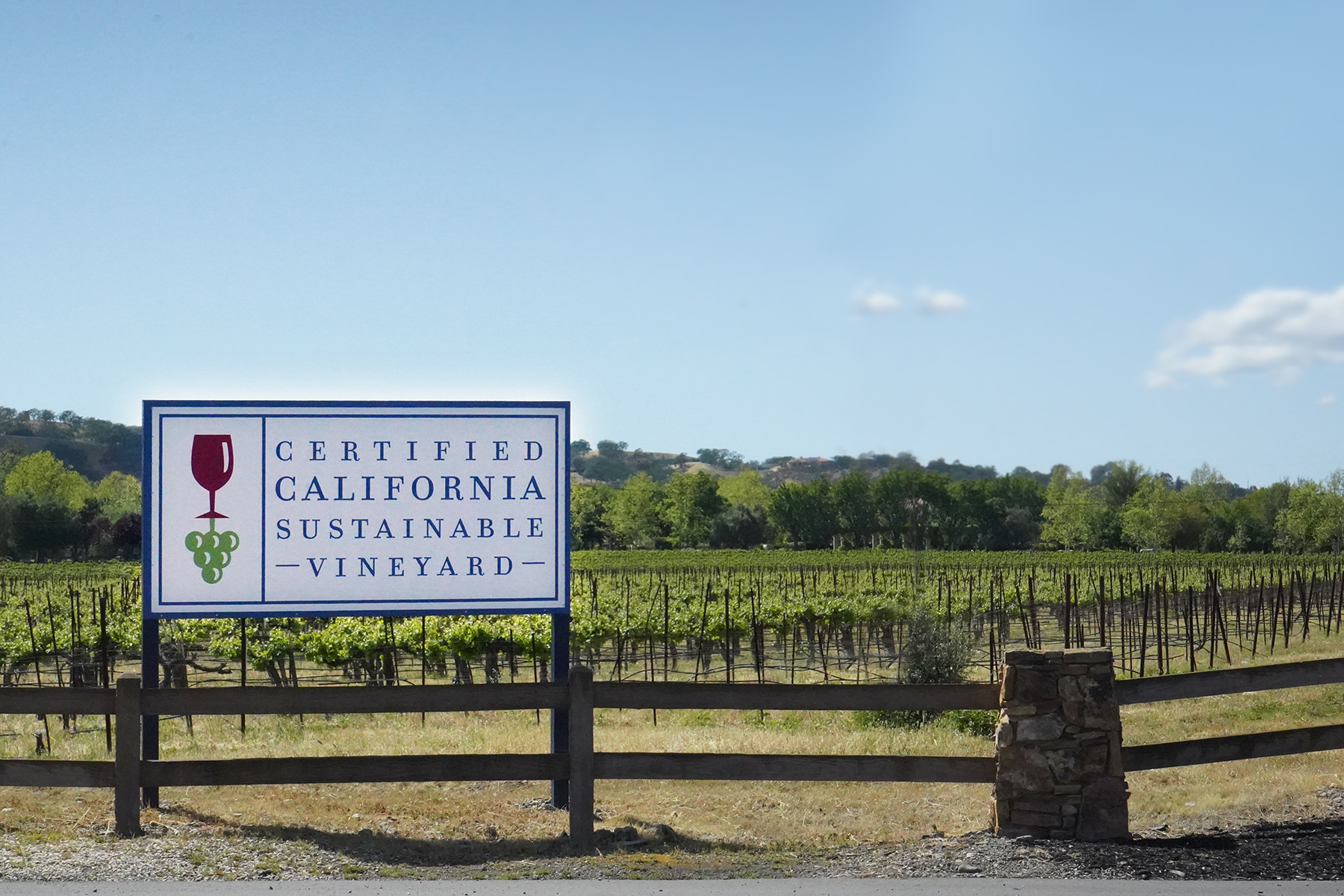 We look beyond merely monitoring water use and air pollution, though these are vital. We are also focused on caring for the creatures that call our Estate home. We keep the soil free of harmful pollutants and provide homes in the form of owl boxes in the vineyard for our flighted friends. To align with our values of sustainability, we meet rigorous standards to maintain certification from the California Sustainable Winegrowing Alliance. We take a look at stewarding the whole ecosystem: from water to worms and roots to roosts. When you gaze out at our spacious and picturesque vineyards while sipping your favorite estate-grown wine, you can relax in the knowledge that this vineyard is committed to a better future. 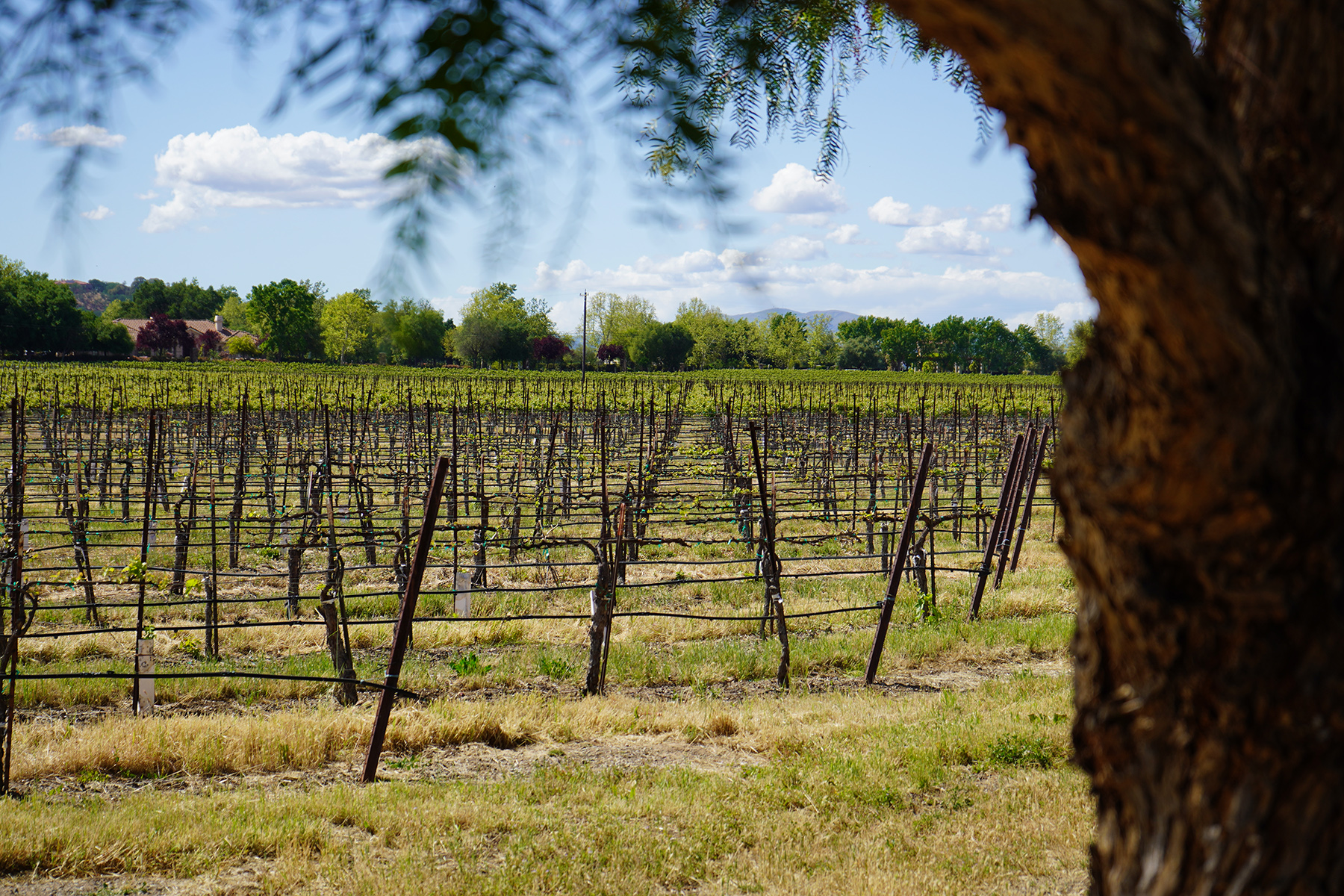 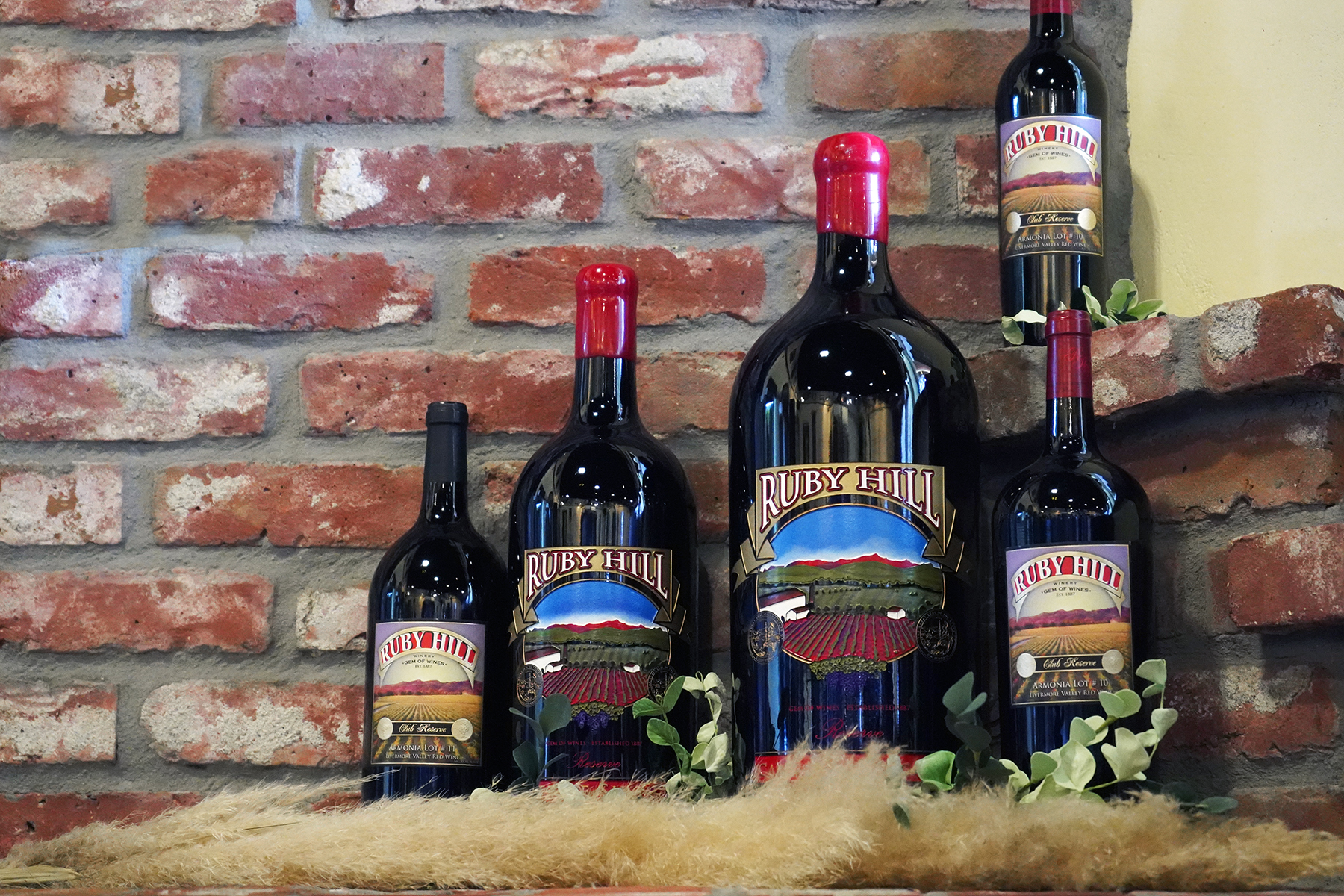 When wines are larger than life, they get big names to match. Whether you want to cellar a special favorite for another day, bring a touch of grandiosity to an upscale party, or give an opulent gift, big bottles are a great solution. Below, we’ve put together a list of every wine bottle, from miniaturized to oversized and the special names given to each one! We think you’ll be surprised.

Sometimes called a Piccolo, a Split bottle holds 190 milliliters, the equivalent of a quarter of a bottle. We think splits are great as small party favors!

This size is exactly what you think! It holds 375 milliliters, equal to half a standard size bottle of wine. Probably not enough, if you ask us!

The tried-and-true wine bottle, perfect for a casual night in or a lovely dinner with a friend or two. Pour 750 milliliters of your favorite vino from this bottle!

This size, holding 3 liters of wine, is equal in volume to 4 bottles of wine and has two names. When the bottle has a smooth “Burgundy Style” neck, it is called a Jeroboam, whereas the standard “Bordeaux Style” neck is referred to as a Double Magnum in this format.

Similar to the previous wines, this format, which holds 6 liters (8 bottles), is called by 2 name, depending on the bottle style. An Imperial bottle is the standard Bordeaux shape, while the Methuselah is the Burgundy shape and most commonly used for sparkling wines.

This bottle holds the equivalent of an entire case of wine, a whopping 9 liters. A single Salmanazar format bottle could easily serve 60 glasses of wine in addition to looking exceptionally kingly.

Yes, they do get bigger! The Balthazar format boasts 12 liters of wine, equal to 16 standard bottles. That’s what we call prestige.

The Nebuchadnezzar format bottle is equal to 15 liters, which is the same volume as 20 bottles of wine. When full, a single bottle can weigh more than 80 pounds.

With an astonishing 18 liters of wine, the equivalent of 24 standard bottles (2 cases) the Melchior is almost too big to believe.

The large format wine bottle known as the Solomon, proudly contains 20 liters of wine, equal to the kingly sum of nearly 27 standard bottles.

Featured in the banner photo, from largest to smallest: Imperial, Double Magnum, two Magnums, and one standard bottle. All sizes available for purchase in the Ruby Hill Tasting room!

Poetry of Vines in Springtime 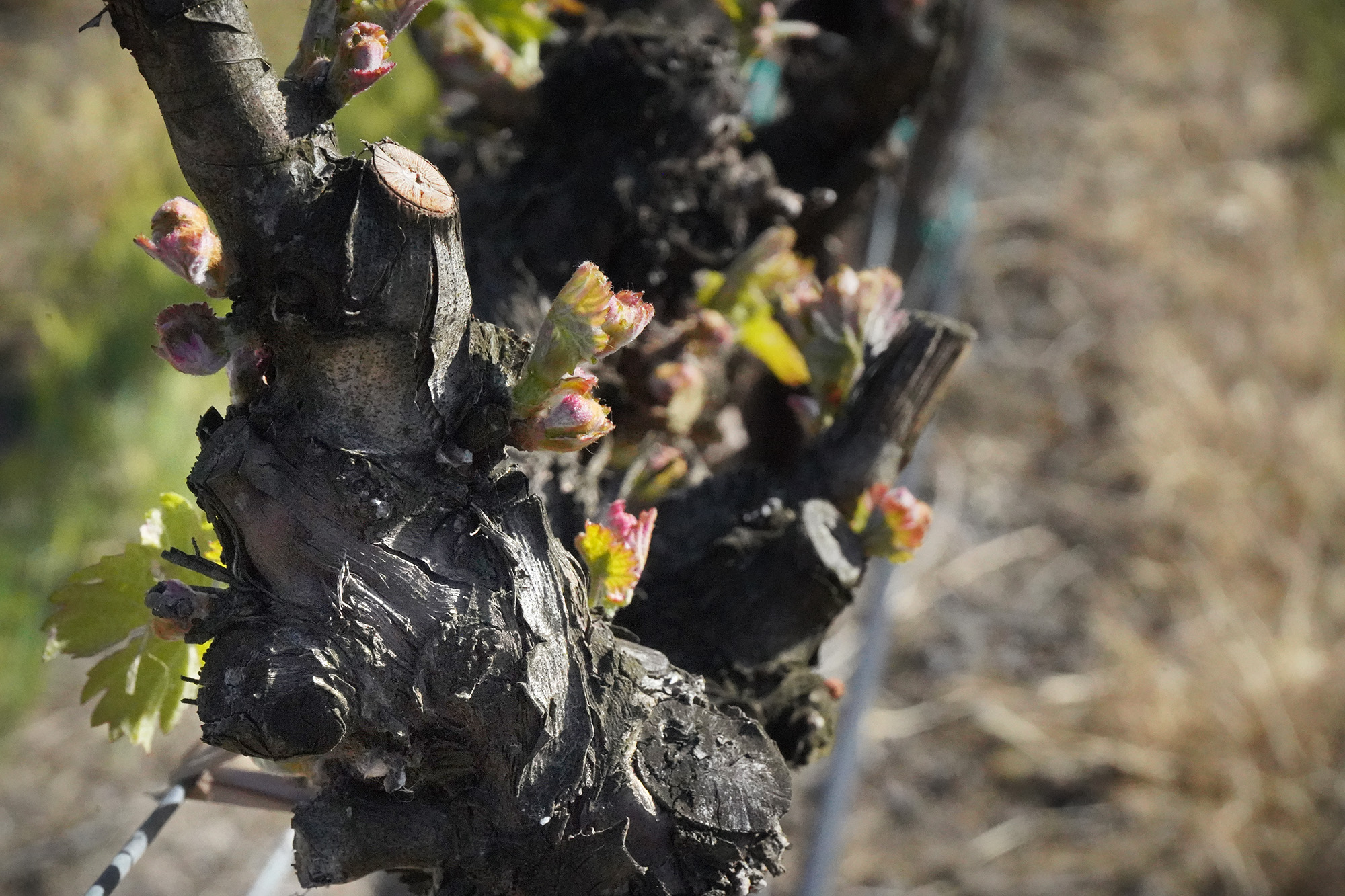 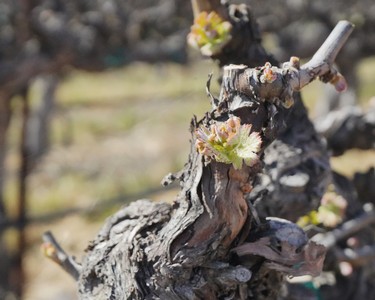 Spring is in the air, bringing changes and sun

As the ever-faithful passage of time

Lets us reminisce as the growth has begun

Every wine was once a budding vine 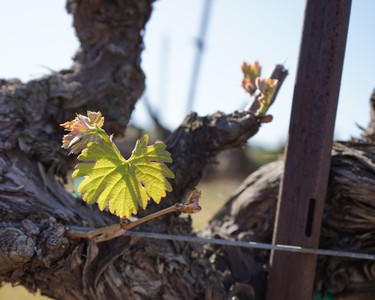 And dormancy to life gives way

Buds from vines, gnarled and curled

The Cabernet are on display 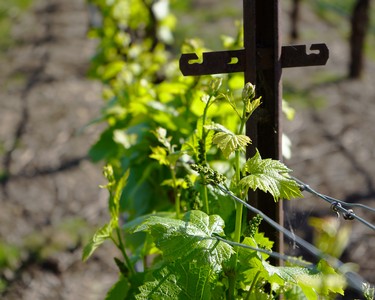 Green is the spring’s budding fashion

Enrobing this land of ours 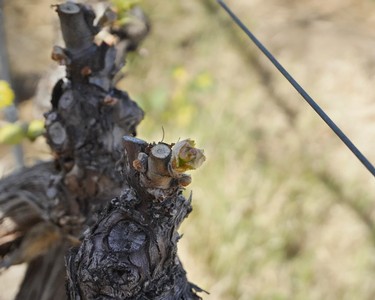 Patiently dreaming of their prime

Late to bloom and slow to age 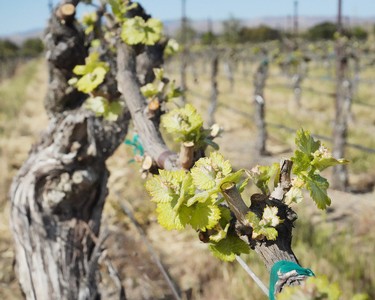 Row after row of Sauvignon Blanc

A prolific and productive block 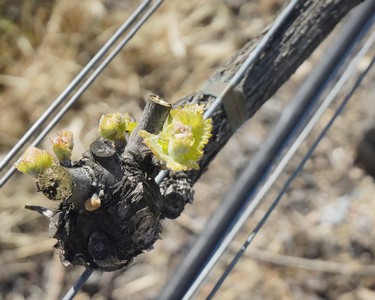 A season of beauty undefiled

As the earth shows its smile

We are beyond thrilled to welcome springtime to the estate vineyards. A new season of life and growth is well underway! 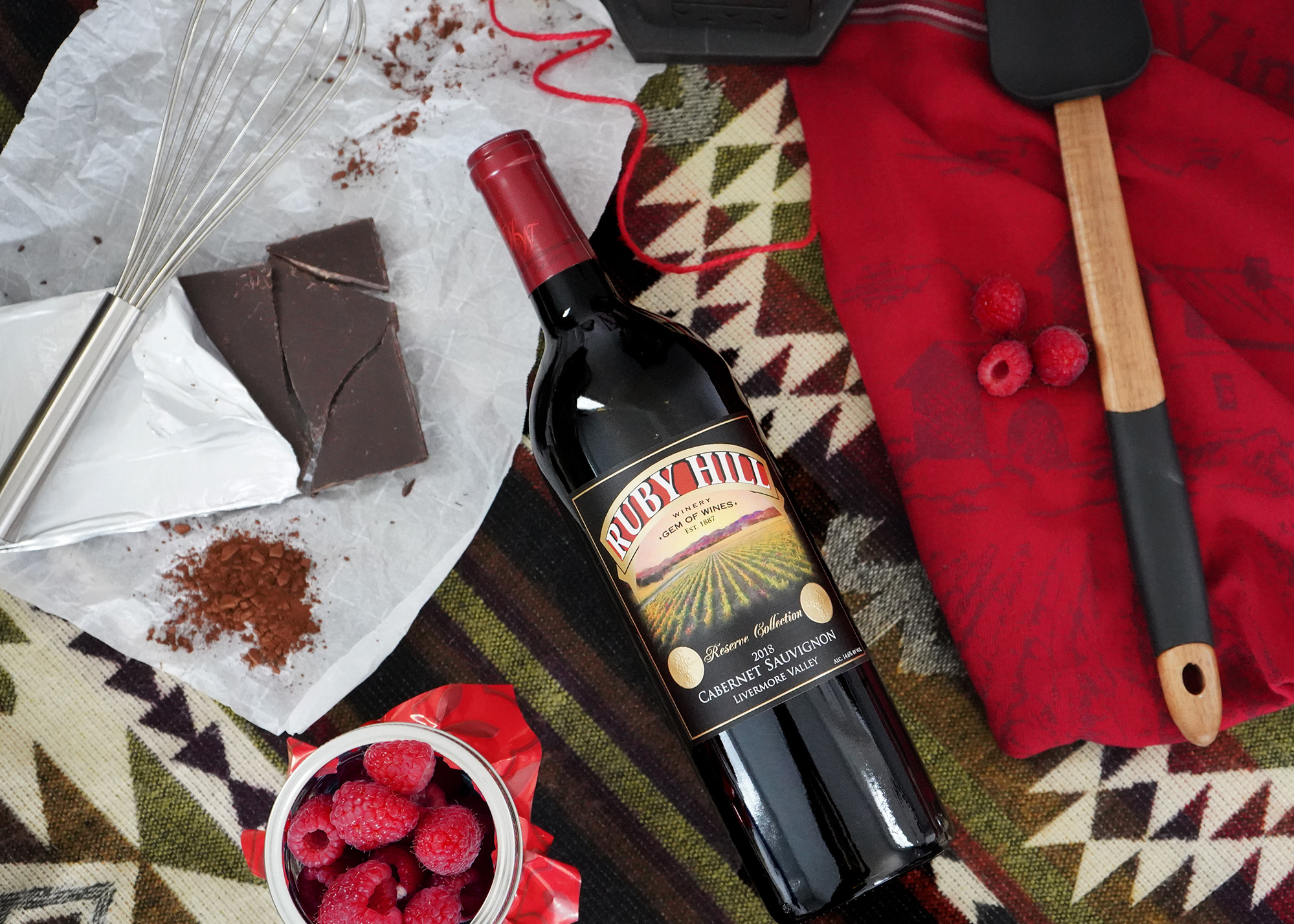 It is always a special treat to open up a new vintage here in the Ruby Hill Tasting Room. We are excited to welcome our 2018 Reserve Cabernet Sauvignon, making its debut soon! This exclusive sneak peek includes notes straight from our Winemaker’s desk.

...A delicious wine that only improves with time to breathe. The nose is very complex with a medley of red and blue fruits layered upon enticing darker base tones. Fruit notes include blackberry and raspberry, joined by floral violet notes, a hint of dried herbs, and cozy chocolate hazelnut aromas. The mouthfeel is very big with just enough acidity to keep the dynamic balanced, and although there are a lot of tannins they are velvety and approachable.  The finish of the wine is long and emphasizes the darker fruits and oak character…
~ Winemaker Jesse Plautz

Dark chocolate mousse and a luscious red wine raspberry sauce are a match made in heaven in this stunner dessert. Perfect for a romantic dessert or whenever that chocolate craving hits! 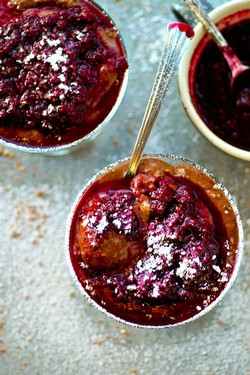 Sounds delicious to us! The rich tannin of Cabernet Sauvignon is a perfect match for the creamy, bittersweet profile of a Dark Chocolate mousse, so that’s what we’re pining to try! This recipe includes a topping of raspberry sauce, which of course can be crafted with our impending arrival, 2018 Reserve Cabernet Sauvignon. Drunken strawberries, rich chocolate mousse, and a glass of red wine? That’s an evening to remember!

PS: Fans of our 2017 Cabernet Sauvignon, now is your chance! It’s not too late. Get the last bottles of this critically acclaimed and gorgeous vintage before they are tucked away into our Library Collection!