Proud as a Peacock 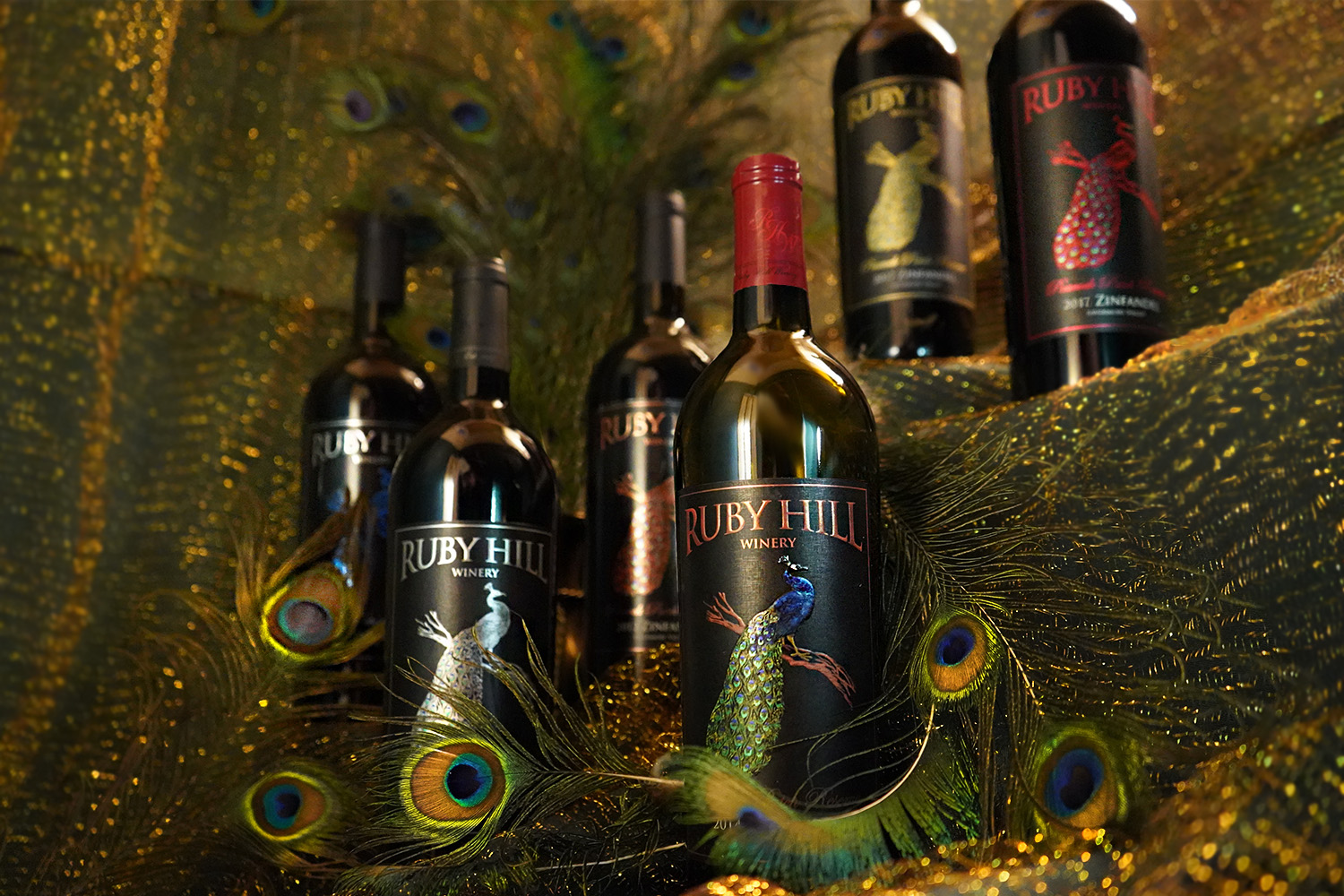 In the southwest corner of our estate vineyard, a block of Zinfandel vines grow in gravelly soil. The grapes produced by these vines are flavorful and bold, giving our Peacock Patch Zinfandel the most luxurious aromas and flavors. To celebrate the iridescent bird that graces our bottles, we wanted to share some fascinating facts about the peacock.

If safety is in numbers, make sure your Peacock Patch Zin
doesn't go home alone! This smooth wine is dense with fruit flavor
and pairs will with all your summer cookout dishes.
Get some while it's still on sale! 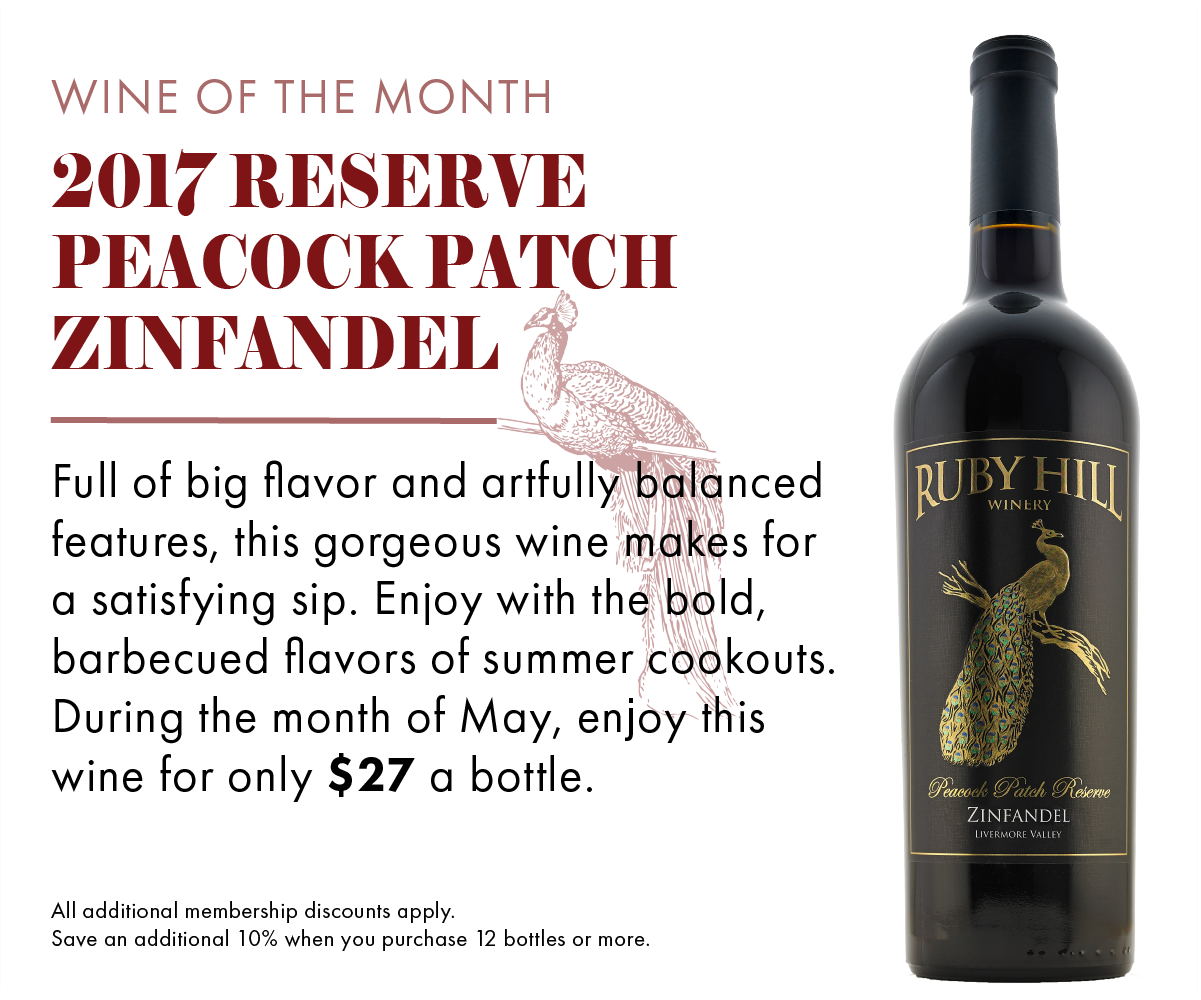 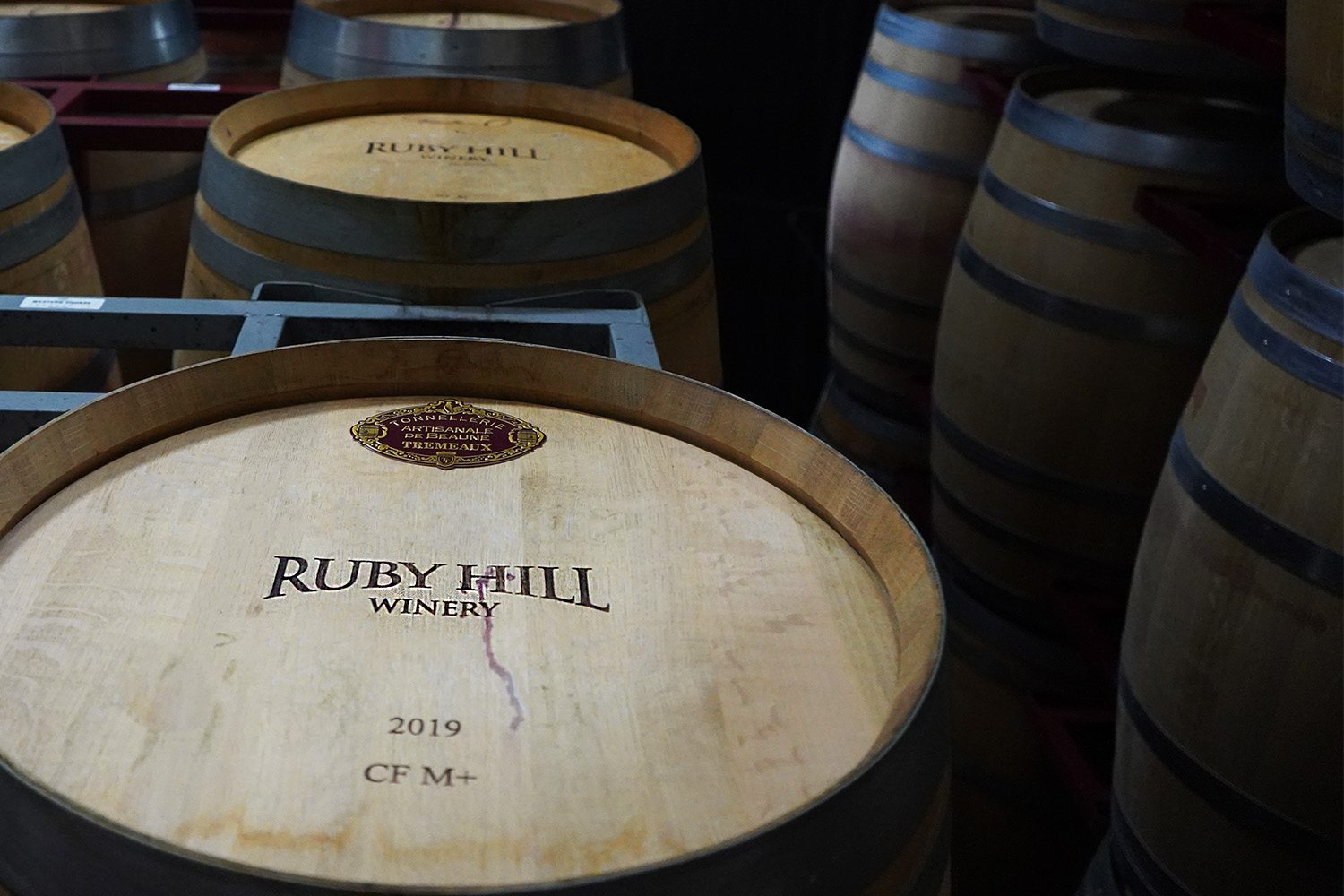 They say “it’s what’s on the inside that counts” and when it comes to our wine barrels, we agree. Even still, we’re happy to take a moment to appreciate what these oaken masterpieces bring to the industry. Below, we’ve included some of our favorite obscure barrel facts. See if you can find a favorite! 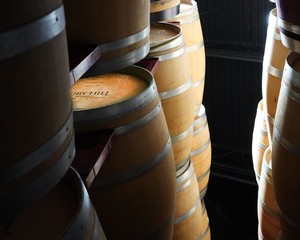 Barrels were a much needed innovation

Wooden barrels have an illustrious history that dates back as far as 350 BC. Prior to barrels, wine was stored in containers made of clay or goat skins. The clay containers, called amphorae, were infamous for being heavy and highly breakable (not to mention the flavor they could impart). The transition from clay to wooden barrels began during the Roman times.

Early barrels were produced on a very small scale as drinking vessels. Small staves of oak, yew or pine would be tightly fastened together by metal loops. Craftsmen would make these vessels using precious metals and the resulting items were so prized by those who owned them that they sometimes chose to be buried with them. 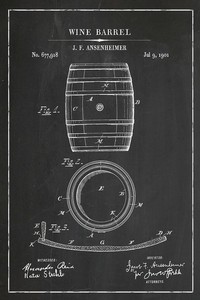 Early barrels might remind you of an IKEA project

Archaeological finds of early full-size wooden barrels show that some barrels included Roman numerals on the staves to aid in assembly if needed. After the barrels had fulfilled their purpose, the staves were often reused to line shallow wells. Barrels in this era could be made from silver fir, cedar, larch, or oak.

As barrels continued to be produced as handy tools, they earned a small role in warfare. While besieging cities, Julius Caesar would order barrels of tar to be set ablaze and then catapulted into the city. On at least one occasion, the town returned fire by rolling flaming barrels back down onto the attacking forces.

Barrels give some up to the angels

Even though barrels are remarkably watertight, there is always a slight loss of volume due to evaporation while wine or another distilled spirit is aging in an oak barrel. The evaporated portion is a combination of water and alcohol and is referred to as the “angels share.” Winemakers account for this loss and monitor the capacity of the barrels. 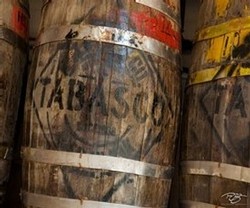 Barrels are a cask of all trades

You probably knew that barrels are the container of choice for aging wine and whiskey, but how about other products? Historically, resources like gunpowder, meat, fish, paint, honey, nails and tallow would be stored in wooden casks. In modern times, barrels are used for products like traditional balsamic vinegar, specialty tequila, and Tabasco sauce.

The words used to describe the different pieces of a barrel include staves, bilge, chime, and bung hole. Rather than a “lid” wine barrels have a small hole, called a bung hole. The bung hole is drilled in one of the staves at the bilge, which is the widest part of the barrel. The stopper (called the “bung”) is usually made of white silicone and keeps the precious cargo from leaking out.

If you would like to repurpose a decommissioned Ruby Hill barrel, we're selling! Our 100% oak barrels have served their time keeping our wine safe and delicious and are now looking for a new home. Available for pickup anytime at our sister winery, Rubino Estates. Call (925) 484-1699 with inquiries or to purchase your own! 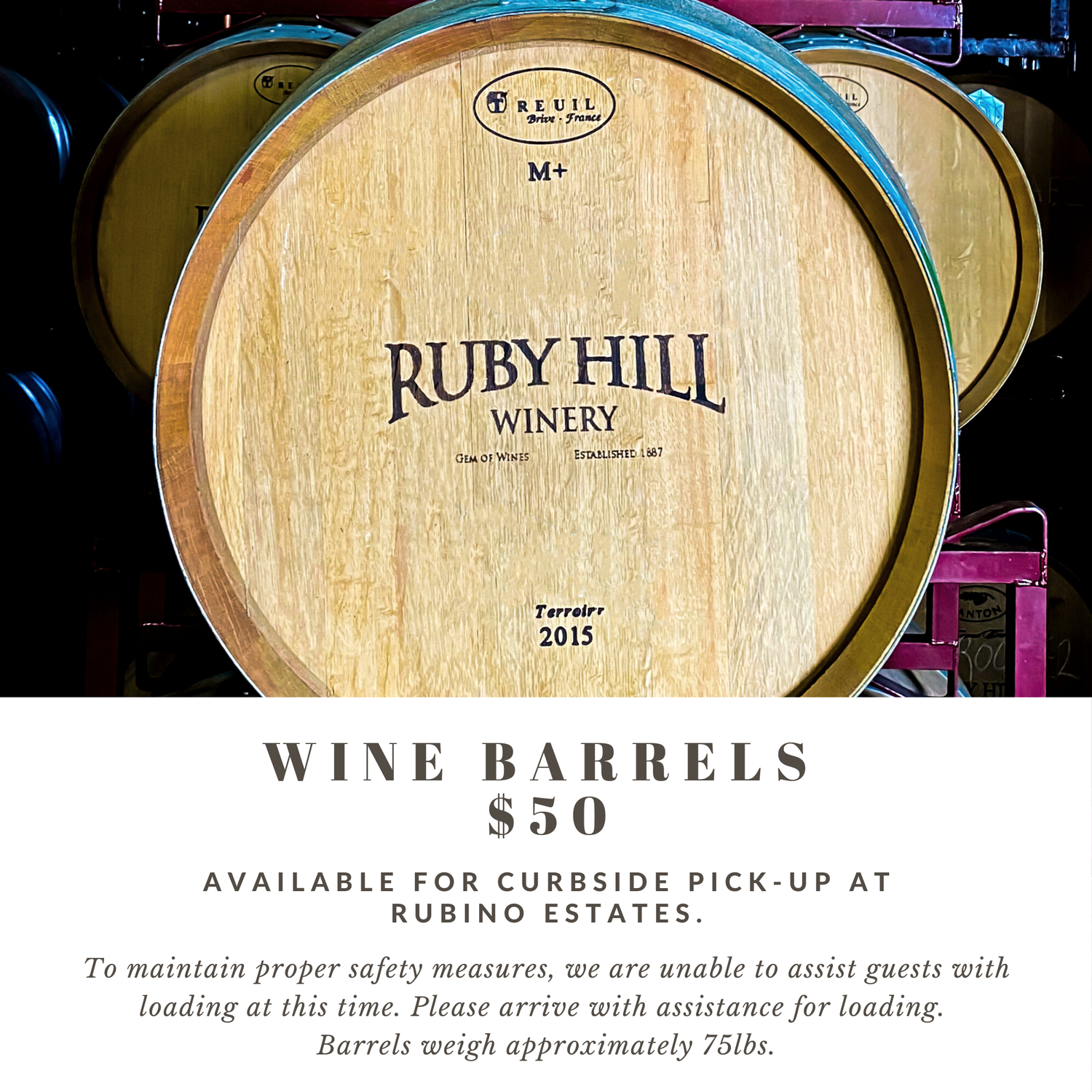 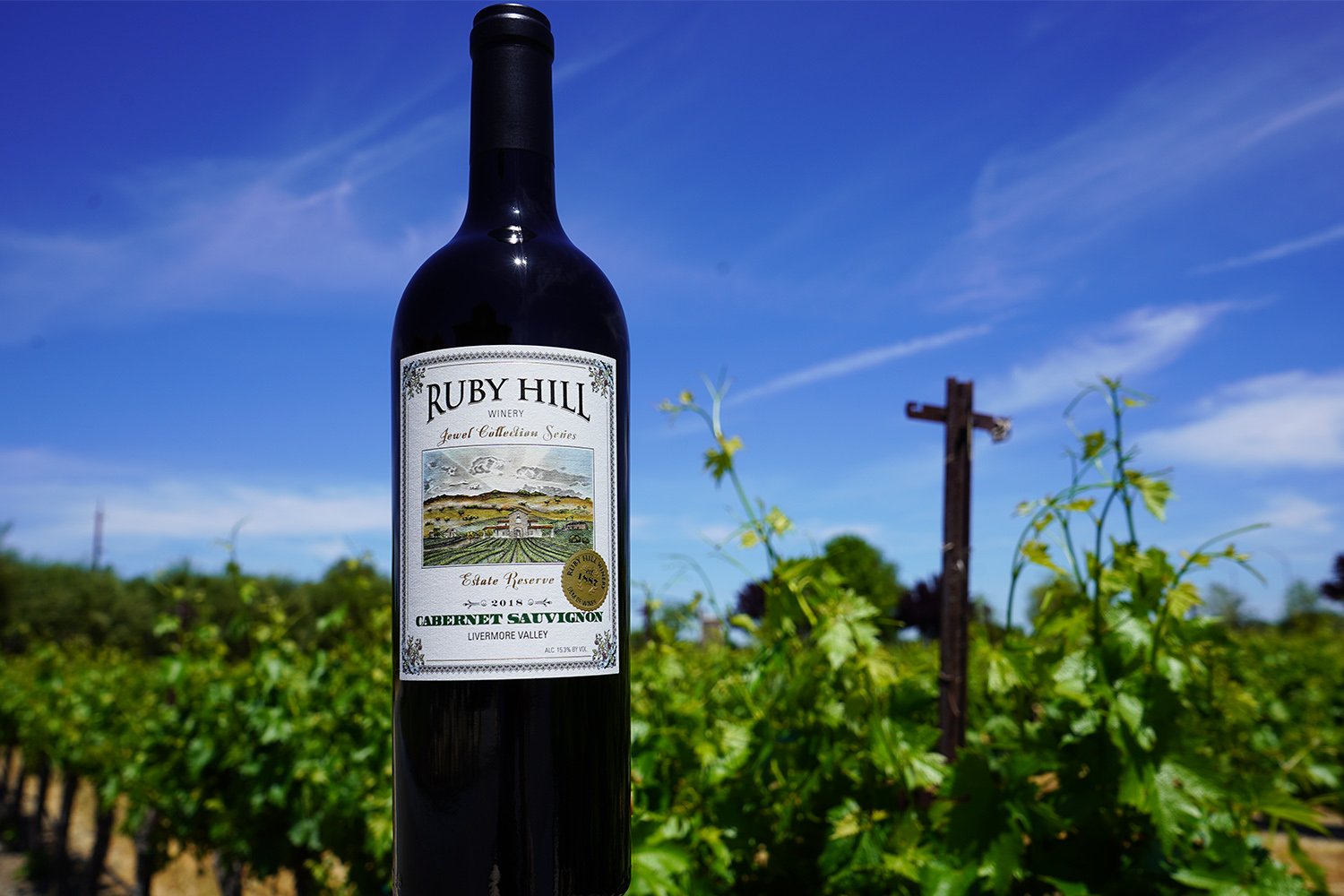 The weather is officially warming up! Spring is on its way out and summer is quickly approaching, which means we're ready to fire up the grill and relax by the pool. This Sunday, May 16th is National Barbecue Day, and that’s great news for us. We’ve just introduced a new vintage of our Jewel Collection Cabernet Sauvignon, so we’re ready for a celebratory steak dinner—we have our eye on rich cuts of beef to pair with a wine like our Jewel Cab. We feel it’s proper to splurge on a hearty helping of filet mignon to welcome this new vintage. For pairing purposes, this cut is best served between rare and medium-rare, and a topping of herb butter never hurts!

Below, we’ve included a quick guide for reliably delicious grilled filet mignon, with mouthwatering char and perfect color. When grilling your filet, a minute or two can make a world of difference, so don’t sweat it if it takes time to perfect your technique.

For the Garlic & Herb Butter 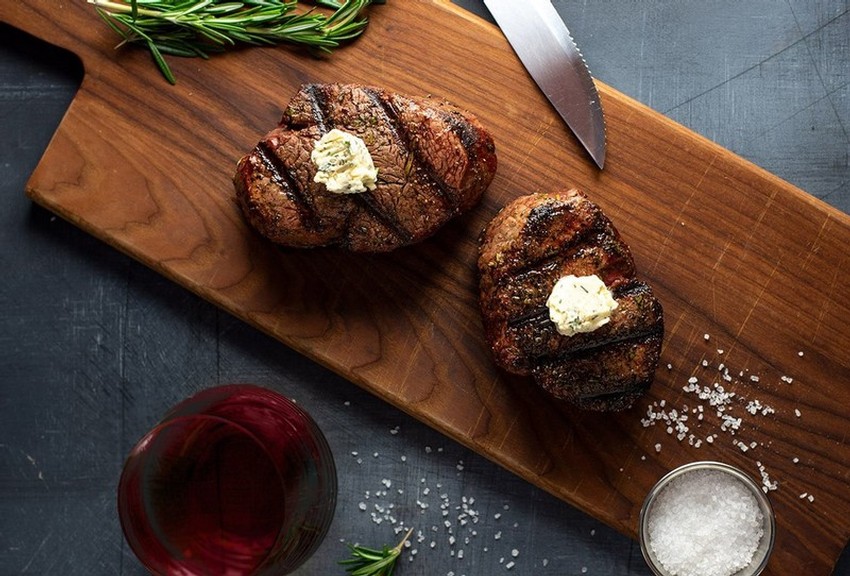 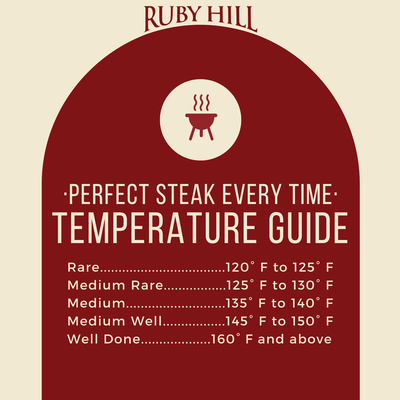 Remember, depending on the size of the steak, the more or less time it will take. This recipe is ideal for an 8-10 ounce portion, roughly 2 inches thick. We recommend using a digital thermometer to confirm, and enjoy making the perfect steak every time!

Serve your filet with a glass of our new 2018 Jewel Cabernet Sauvignon and your favorite side. We recommend continuing the celebration of all things cookout with Grilled Mexican Street Corn or Old-Fashioned Potato Salad!

Are you ready for barbecue season? Tag us on social media to let us know your favorite cookout pairings @rubyhillwines! 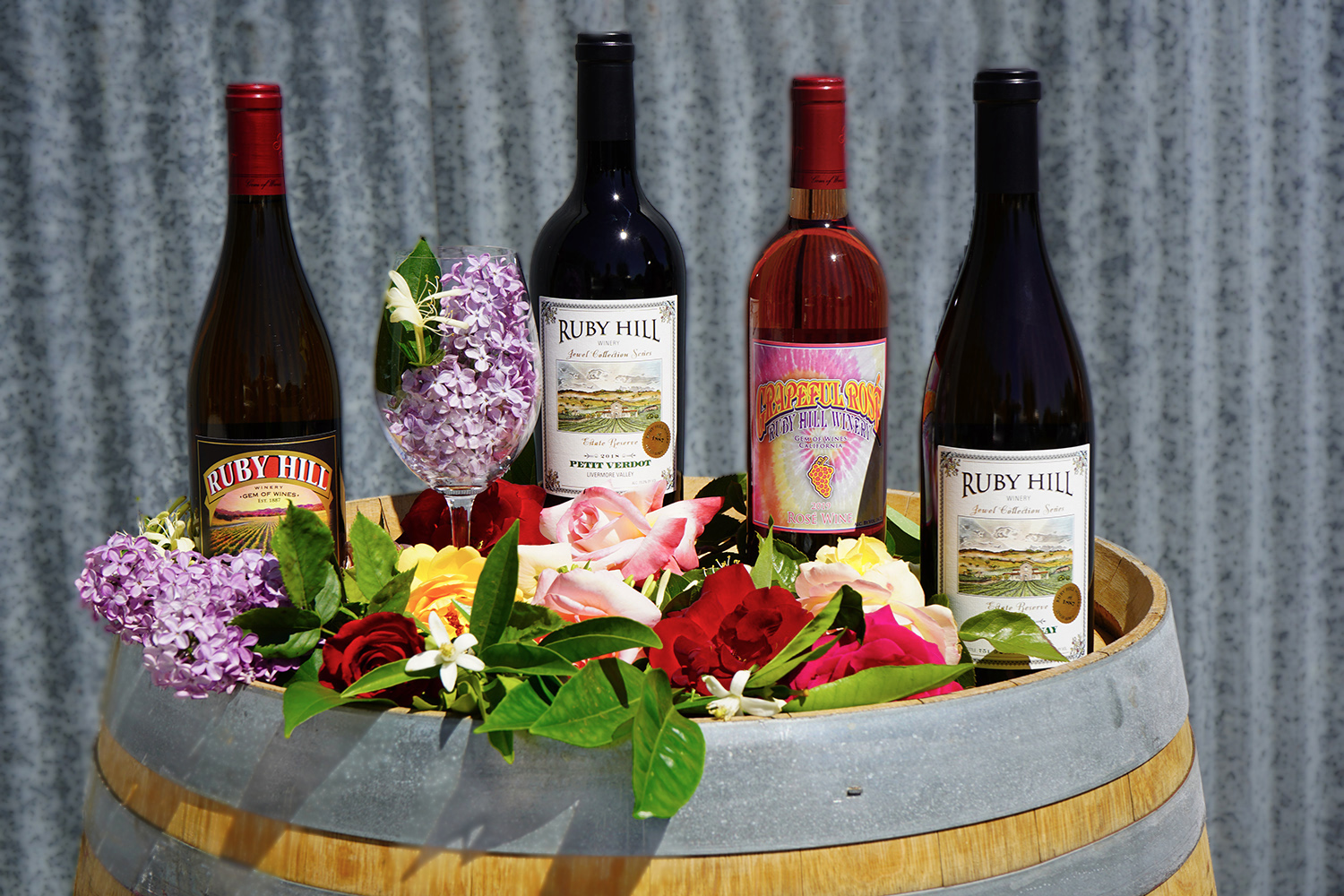 Spring is in full swing and summer is fast approaching here in the scenic Livermore Valley! We don’t want to let spring slip away without taking a few moments to stop and smell the roses. Admittedly, our favorite kind of "bouquet" is the collection of delicate aromas found in a glass of wine, but we’ve learned to appreciate the smell of the flowers themselves. Sometimes, the bouquet of a wine features floral characteristics, some of which may also appear on the palate. Tossing flowers into barrels is not a part of our process, so how do wines earn these lovely essences? The wine grapes themselves have a number of compounds in their pulp and skins which are also found in other plants, including aromatic flowers. Wines may be described as having notes of violet, lily-of-the-valley, iris, and many more. Several of the wines here at Ruby Hill Winery boast a flowery touch, making them a perfect wine for savoring the remainder of springtime. This week, we're reflecting on a few of these wines, and the symbolism behind their floral accents. 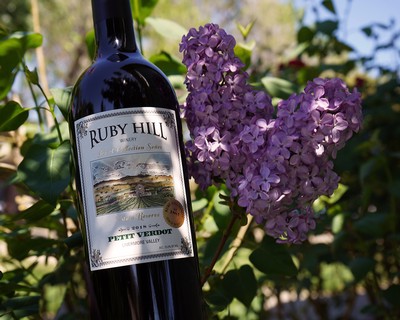 The Petit Verdot varietal is known for carrying an essence of violet amidst bold flavors. In addition to these delicate complexities, our Jewel Petit Verdot presents pleasant notes of lilac. Lilac flowers grow in fragrant bunches, blossoming for only 2 weeks in late spring. These blossoms are featured in Greek myth to represent the joy and first love of youth. In our Jewel Petit Verdot, we say that love has matured well! 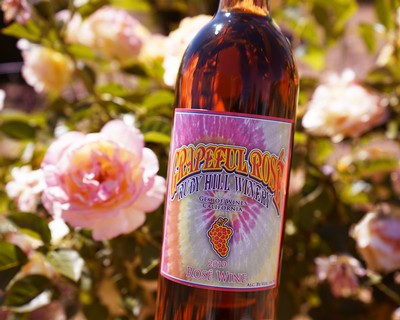 Quite fittingly, our Grapeful Rosé is highly aromatic with the scent of roses, delighting one's senses with the classic fragrance. This wine is light, crisp, and refreshing, making it the ideal beverage for summer sipping. Our Rosé earns its color from the combination of Trebbiano, a white wine grape, with the rich purple-red hue of Petit Verdot. Pink roses can symbolize grace, admiration, loveliness, and thankfulness. Pink wine, on the other hand, symbolizes something delicious (in our opinion). 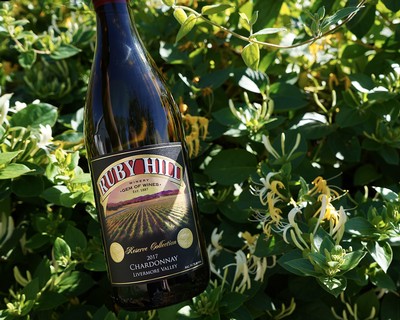 White wines generally offer an even broader selection of floral notes, and our Reserve Chardonnay is no exception. This rich and buttery Chardonnay has a gorgeous aroma, including layered honeysuckle, cloves, vanilla, wildflowers and lemon curd. The climbing vines of honeysuckle boast fragrant leaves in addition to their sweet-scented blossoms. These flowers are irresistible to butterflies and hummingbirds, and add another lovely layer of appeal to our Reserve Chardonnay. 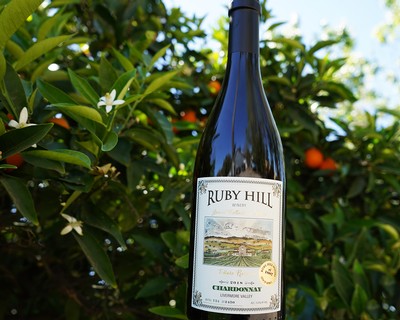 The semi-sweet citrus character of orange blossoms delicately frames the creamy flavors of butterscotch and s’mores on the palate as you enjoy this wine. For centuries, brides were adorned with orange blossoms which represented good luck, fertility, and innocence. Now, we appreciate the timeless enjoyment of our Jewel Chardonnay, which is a delight on the palate and perfect in every season.

Mother's Day is coming up this Sunday, so it's the perfect time to find mom's favorite flowers and buy a wine to match! Is there any better gift?